Cheriyal or Cherial is a very small village located at a distance of about 93 Km from Warangal in the Indian state of Telangana. There are numerous villages in India, then what is it that makes this village so famous about? Well it’s a normal village with normal people living there, but the only difference is that the occupation of these villagers is quite different from others and that is what catches the eyes of all the tourists. The place is famous for making the magnificent scroll paintings, which are impossible to find anywhere else in the world. 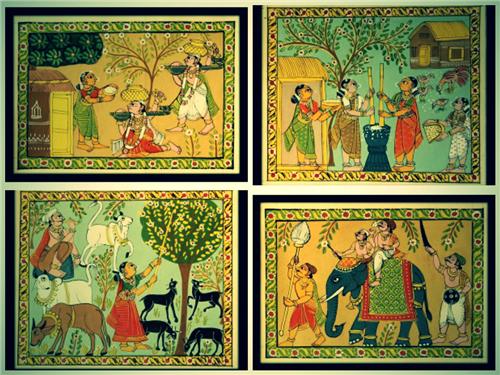 In ancient times, Nakashi art used to be the most famous of all arts among the art lovers. Cheriyal Scroll Paintings are nothing else but the stylized version of the same.  This art used to belong to the Telangana region of Andhra Pradesh in earlier times, but presently Cheriyal is the only place where the art of scroll painting is still alive. In these paintings scrolls are painted in a narrative format, for example, some of the paintings depict stories from local mythology or sometimes they depict stories from Puranas and Vedas. If we have to compare this narration in today’s world, then example of a comic book or a movie roll would be perfect for the same.

Initially these paintings used to be generally around 40-45 feet in length and 3 feet in width with inclusion of around 50 panels. Traditionally they are made in vertical format, illustrating stories in horizontal panels. To separate the two borders, a floral border was used. Each panel used to depict one part of the story. It is very important to know the character sticks of Cheriyal Paintings to avoid any kind of fraudulence activity by paying a very high price for nothing. Let us have a look at some of the characteristics:

These paintings are prepared on a canvas of Khadi Cotton, which is treated with a mixture of white mud, starch and a paste of gum water and boiled tamarind seeds thrice. Before applying a new coating, the first one must be completely dry. After the completion of Canvas, sketching process is done by the artist by using a brush directly on to the canvas. Colors to paint them are made from the natural sources by the artist himself and the brushes used in making of these paintings are made with the hair of squirrels. The outlines are made very sharp and well defined, which reflects the experience of the artist. As oppose to paintings, masks and dolls are made of saw dust, tamarind paste and wood. Sometimes masks are prepared from coconut shells. 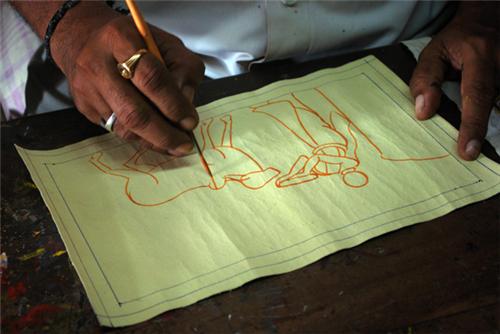 How to reach at Cheriyal

Best way to visit the village is by your own vehicle or a hired taxi. You can combine the trip of Cheriyal with that of Pembarti, which is another jewel of Warangal for art lovers. The village is located at a distance of about 93 Km from Warangal and is easily accessible by road. You can also take a train to Jangaon from Warangal and consecutively take a bus from there to reach Cherial.