Warangal is known for its multicultural festivals. Bathukamma, Bonalu and Shakambari festival are the most famous among the local people of Warangal. The city celebrates most of the festivals of Hindus including Holi, Deepawali or Diwali, Dussera, Raksha Bandhan, Sri Rama Navmi etc. with liveliness and joyfulness. It also celebrates all of the festivals of Muslims including Eid-ul-Fitr, Eid al-Adha, Moharram and Milad un Nabi with the same amount of enthusiasm among the people. It also attracts millions of people for its world famous tribal festival known as Sammakka Sarakka Jatra. Ugadi, Sankranti and Vinayak Chathurthi; all of these festivals of South India are also celebrated here every year. Kakatiya festival is another regional festival celebrated here every year. Let us take a look at some of the major festivals celebrated in the region: 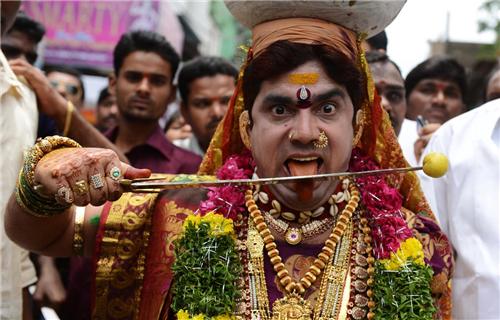 Bonalu festival is celebrated in the month of July or August every year and is dedicated to Goddess Mahakali. Bonam referred to Meal or Bojanam in Telugu, which is offered to the Goddess on this occasion. Women prepare Bonam, which includes rice cooked with jaggery and milk in a new brass or earthen pot. The pot is adorned with turmeric, neem leaves, vermilion and a lighted diya on the top of it and is offered to the goddess with bangles, saree, turmeric and vermilion across the temples in Andhra Pradesh.

Bathukamma refers to “come alive Mother Goddess” in Telugu. The festival is celebrated during Navratras by women. It is celebrated to honor the goddess Gauri in the form of Bathukamma. It is the second largest festival of Telangana region after the Dussera. Women built the Goddess every year from turmeric and by arranging flowers all upon it and then immerse it in the water on the 10th day of the festival. Women celebrate this festival to seek the blessings of the Goddess and to request for the prosperity in their home and life.

The festival is dedicated to the Goddess Bhadrakali. The festival is celebrated at Bhadrakali Temple of Warangal each year with a lot of enthusiasm. The festival received its name from the two words; Shaka meaning vegetables and Ambari meaning who bears. Hence Shakambari Devi is also seen as the Mother Earth who alleviates hunger and also known as 'the bearer of the greens'. People decorate the Goddess Bhadrakali with different vegetables each day during the celebration of this festival. People also give presentations on Vedas and spiritual speeches are also part of the festival.

This congregation is celebrated among the tribal population of South India to remember their Goddess Samakka and Sarakka, the mother and daughter who saved them in the past during a fight between the tribes and Kakatiya Dynasty. This is celebrated for four days in the month of February every second year and attracts millions of people towards it. The festival is also known as Kumbh Mela of South and celebrated in the Medaram village situated within Etunagram Wildlife Sanctuary.

Eid-ul-Fitr is celebrated at the end of Ramadan (The Islamic holy month of fasting) by Muslims throughout the world every year and is also known as the Sweet Festival. The date of the festival can not be fixed as it is celebrated on the observation of the new moon by the local authorities, Hence the date varies by localities. Now a days most of the countries celebrate the festival on the same day as Saudi Arabia. Usually the festival falls in the month of March every year.

Explore more about Culture of Warangal