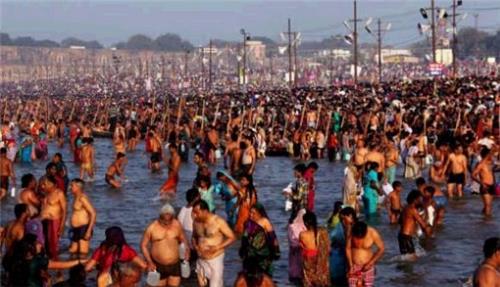 The Sanskrit word Pushkaram means “the one who purifies”. It is the celebration or worshipping of rivers. Godavari pushkaralu is the festival of River Godavari. It occurs once in every 12 years. Last festival was held in the year 2003. This is a festival that is celebrated on the banks of River Godavari for 24 days. The first 12 days of celebrations when the Jupiter enters the River’s Zodiac sign are called Aadhi pushkaram and the last 12 days of celebrations when the Jupiter leaves the Zodiac sign is called Anthya pushkaram. These 24 days are very holy as it is believed that the pushkarudu- the god of Pushkaralu who has the power to make any river holy will travel only during pushkaralu (on these 24 days).

As per Hindu mythology, Zodiac sign is assigned to each of all the 12 rivers that Hindus treat holy and equivalent to Gods. The dates of the festival are decided based the position of planet Jupiter in the Zodiac signs of that particular river. The celebrations will last as long as the Jupiter is present in that river’s Zodiac sign. The Zodiac sign for River Godavari is Leo. This year the pushkaralu will be called as MahaKumbh and will be celebrated from July 14th to July 25th, 2015.

The River Godavari starts at Triumbakam in the Nasik district of Maharashtra and flows through Telangana and Andhra Pradesh before merging into the Bay of Bengal. People from all over the country visit the River Godavari to take a dip. It is strongly believed that a holy dip in the River during pushkaralu will wash away your sins and all bad karma apart from enhancing the mental and physical abilities. People also perform rituals for all the family members who have departed.  It is believed as per Hinduism that if you are luck the holy dip in the river during pushkaralu will relieve you from rebirth after death. It also said that not only people but also all holy saints and gods take a dip in the holy river during pushkaralu. Crores of people from all over the country gather on the Ghats to celebrate the pushkaralu.

In Telangana, the Pushkaralu will be celebrated on 67 Pushkar Ghats in 5 districts. In Warangal district the Pushkar ghats are Ramannagudem and Mallakatta in Eturunagaram mandal and Mallur in Mangapet mandal.  It is estimated that around 6.5 crore people will attend this celebrations for over 24 days.

The government of Telangana is making arrangements by spending Rs.266 crores on all the Pushkar Ghats in their region so that the devotees do not face any problems during the celebrations and have a smooth and comfortable experience. The government is planning to conduct the Godavari Pushkaralu on the line of Kumbh Mela so it is all geared up to provide the best for all the devotees. The south central railway runs special trains from all major cities to the towns where the pushkaralu are being celebrated. The celebrations also include music and some cultural programmes.