Sammakka Saralamma Medaram Jathara is a holy tribal festival of Medarram village in Warangal district that is organized once in every two years. This festival attracts people in thousands of number just like Kumbh Mela. It is believed that the Goddess have the power to grant wishes of the people who visit them during this jatara. 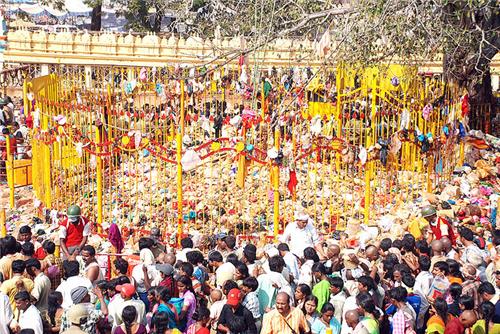 Mini Sammakka Saralamma is held once in every two years in the Tadwai mandal (a small village in the thick forest area of Warangal district) which is 110 Km from Warangal. Even though this jathara is not as big as the actual Sammakka Saralamma, people from all over the country turned out in huge numbers.

The rituals of mini Sammakka Saralamma jatara starts in the month of Magha of full moon day of Sudha Pournami and continues for 3 consecutive days. On the evening of Magha Sudha Pournami, which the full moon day of the telugu month Magha, Sarakka would be brought traditionally in the form of vermilion and will be placed on an earthen platform called gadde by a group of tribal priests.

By the next sunset, Sammakka, the presiding deity in the form of Vermilion will be brought from Chilukalagutta. Then the deities Sammakka and Saralamma will be placed together on two separate platforms. Both the deities are represented by Bamboo sticks that are smeared with turmeric and vermilion. One can see a huge tree standing on Sammakka gadde since time not known to the tribal people.

The celebrations if the jatara starts amidst heavy beatings of drums and noise of trumpets blowing, yelling and screaming of people. The priests begin the process by bringing in an ochre box and other relics from a location known only to them. No one other than the tribal priests knows where these items are hidden in the deep forest. The locals believe a huge tiger prowls around the place peacefully during the celebrations.

As per the history, the town Medaram was the headquarters of tribal kingdom which was headed by Medaraju. The tribal kingdom in the Dandakaranya was extended up to some tribal areas in Maharastra. While fighting the kakatiya ruler, tribal king Medaraju’s daughter Sammakka and her daughter Sarakka scarified their lives. In the battle, Samakka’s husband Pagididda Raju, her son-in-law Govindaraju and her son Jampanna also lost their lives. Medharam was declared an independent Kingdom by the Kakatiya Kings since they were moved by the fight put by the Mother and her daughter. They also started the Samakka-Saralamma jatara in memory of the courageous fight put up by the mother Samakka and daughter Sarakka.

The Government of Telangana and the district administration organizes the festival. Private transports and Government buses run special buses from Karimnagar, Warangal and Khammam to the area a week before the jatara commences. Several temporary dwellings and health camps are set up around Medaram for the visitors.