Medaram is a village located at a distance of about 95 Km from Warangal. The village is famous for Sammakka Sarakka Jatara festival held once in every two years. The festival is celebrated to honor the goddess Sammakka and Saralamma by tribal population. It is world’s largest tribal religious congregation. It attracts a huge number of devotees and is known to be the second largest festival of India only after Kumbh Mela, hence it is also known as Kumbh Mela of South. It is a state festival of Government of Andhra Pradesh. 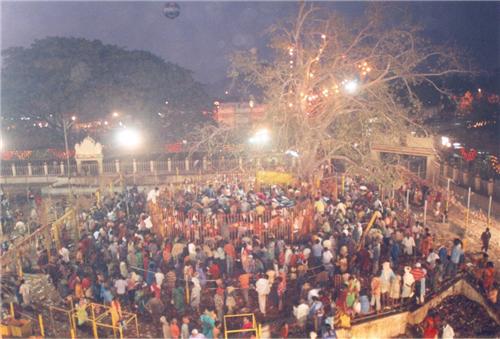 There are many stories associated with this place, but the most famous story is of Sammakka and Saralamma; a mother and a daughter, who sacrificed their lives to save their tribe. In 13th century, some of the tribal leaders found a girl playing amidst tigers during their hunting. She was adopted by the tribal leader and later got married to Pagididda Raju, a tribal chief of Kakatiyas. They had three children including two daughters namely Sarakka and Ngulamma and One son Jampanna.
After a few years, the area went through a draught which lasted for years and Pagididda Raju did not pay tribute to the king Pratapa Rudra as a result of the same. But rather than understanding the problem of the tribe, the king sent his army to pacify tribals and collect the tribute. Unable to pay the tribute, the tribal chief pagidde Raju decided to have a war for justice, which took place on the banks of "Sampenga Vagu”. During the fight Pagididda Raju, his daughters, son in law Govinda Raju lost their lives irrespective of their sheer courage. Later his son Jampanna also died in Sampenga Vagu, which was later renamed as Jampanna Vagu in the memory of his fight against Kakatiya army.

After receiving the news of her entire family dying in the battle, Samakka also fought with Kakatiyan army and did a lot of damage to them. Fascinated by her bravery the Kakatiyan prime minister proposed peace and offered her to be the chief queen in the emperor’s harem, but she decided to avenge his family and continued to fight. After being wounded badly, she told her people that as long as they will remember her, she will protect them and cursed the Kakatiyan Dynasty to perish. Later she went to Chilakala gutta in the forest and after a lot of search her people only found a red achre box, her bangles and the pug marks of a huge full grown tigress at the same place where she was found in her childhood. Kakatiyan dynasty ended soon after that.Since then Indian tribes are celebrating this festival to remember Samakka and Sarakka.

Sammakka Sarakka Jatara held in the month of February every second year. Festival is celebrated for four days and attracts around ten million people.  Many tribal devotees from all around India reach here to celebrate this festival. People offer bangaram or gold of equal quality to their weight to the goddesses. After they are done with their offerings they take holy bath in Jampanna Vagu, a tributary of River Godavari. As per the legends associated with Jampanna Vagu, Jampanna is the son of goddess Sammakka and a warrior himself, who died during the tribal battle with Kakatiyans in the same stream. Colour of Jampanna Vagu is red and is the symbol of the death of Jampanna. Tribals take a holy bath in it to induce courage into their souls and to remember the sacrifice of their God to save them. 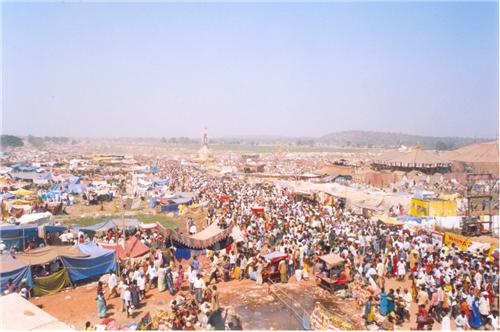 How to Reach at Medaram

Medaram is located at a distance of about 95 Km from Warangal. Earlier it was difficult to reach at Medaram as Bullock cart was the only way to reach here till 1998, but once the state government announced it as an official festival and built a road, It has become quite easy to reach here via road. Although you must be prepared mentally to face the traffic jam of up to 60 Km on the road of Warangal during this time. Buses and private cars are the only means to reach here.

Most convenient place to stay around Medaram is ITDA guest house. Many huts are available for tourists to stay here.