Sri Someswara Temple is located at Kolanupaka at a distance of about 82 Km from Warangal. The temple is a famous pilgrimage site of south India and is located close to Kulpak Ji, another famous religious site for Jains. It is a very ancient temple dedicated to Lord Shiva. The temple is also known as Veyi Lingala Gudi or Thousand Lingas Temple. Veera Saiva Dharma Samsthapanam protects the temple. 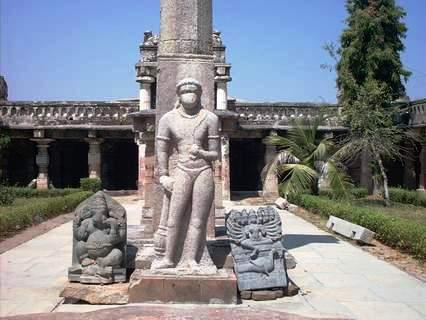 Most of the temples of Lord Shiva are made with Shiva Linga, but Sri Someswara has Lord Shiva in human form. An archeological museum is also found here. One can see many sculptures of ancient times from 11th century to 14th century in this museum.  You will also find a four pillar mandap with Nandi in front of Someshwara Temple. There are stone inscriptions of kings who have donated gold, cow, land etc, to the temple during the period 1070-1126 for nithya pooja and maintenance. The main deity of the temple is Swayambu linga known as Someswara lingam and his companion goddess Sakthi Matha Chandikamba. Maha Dwaram (Main Entrance) of the temple is built in Kakatiyan style. There are many beautiful sculptures of various Gods and Goddesses. A linga named Nayalinga is also situated here. Many villagers are of the believe that their problems could be solved by touching Nayalinga. Sri Jagadhguru Renukacharya Lingothbava moorthy can also be seen at the back of Someswara swamy inside the main sanctum.

Being a temple dedicated to Lord Shiva, Mahashivratri is the biggest festival celebrated here. Mahashivratri occurs in the months of February or March every year and celebrated at a huge level throughout india. All of the devotees of Lord Shiva offer their praying to the God on this auspicious day. Most of the people have fast and visit to the temples.


How to Reach at Sri Someswara Temple

Kolanupaka Bus station is located at a mere distance of 1.5 Km from the temple. Buses are easily available from Warangal bus station to Kolanupaka.  It is better to visit Sri Veeranarayana Temple ad Jain temple with this place as all of these are located close by.